Holy Saturday, Easter Eve or Black Saturday is the name given to the day between Good Friday and Easter Sunday. Some Christians recognize Holy Saturday as the day on which Jesus “rested” from His work of providing salvation.   It is the seventh day of Holy Week.  When Jesus died, He called out, “It is finished!” He had completed His job.  Sin had been atoned for and salvation was now available.  Jesus had built a bridge between the Father and us.  We can now go straight to Him and not via priests and holy men.

This day is traditionally a time of reflection and waiting like Lent.  Jesus’ followers spent this day waiting after his crucifixion on Good Friday.  He had said He would rise from the dead so they would be watching for Him.  Most likely they would be recalling every word He said to them.

It is also the day when Roman governor Pontius Pilate instructed guards to be posted at the tomb to prevent Jesus’ followers from removing the body to claim that He had risen from the dead.  Pilate sealed the tomb, secured it, and posted guards.  No one was getting in.

How have you felt reading the activities and what happened during the days of Holy Week?  I learned some things when researching for this week’s blog that I did not know before now.   I felt like I was there trailing around after Jesus, too.  At the end of each day my emotions were raw.  How could the people be so callus and blind not to see that Jesus was The Son of God?  How could they beat and torture anyone to that degree, let alone Him?  I was outraged and heartbroken.  I cried heartfelt tears of anguish.

I know the ending.  I also know this was God’s plan, but it still hurts.   For those of us baptized, when we were baptized we died with Christ (going down under water) and arose with Him (rising up again).

Scripture tells us this in Romans 6:3-11 King James Version (KJV):

”Know ye not, that so many of us as were baptized into Jesus Christ were baptized into his death?  Therefore we are buried with him by baptism into death: that like as Christ was raised up from the dead by the glory of the Father, even so we also should walk in newness of life.  For if we have been planted together in the likeness of his death, we shall be also in the likeness of his resurrection: knowing this, that our old man is crucified with him, that the body of sin might be destroyed, that henceforth we should not serve sin.  For he that is dead is freed from sin. Now if we be dead with Christ, we believe that we shall also live with him:  Knowing that Christ being raised from the dead dieth no more; death hath no more dominion over him.  For in that he died, he died unto sin once: but in that he liveth, he liveth unto God.  Likewise reckon ye also yourselves to be dead indeed unto sin, but alive unto God through Jesus Christ our Lord.” 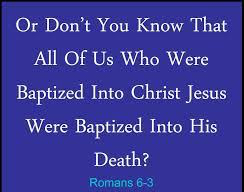 So, while we await Resurrection Sunday, take a moment to reflect.  Just as we were baptized and died with Jesus, we died to sin.  We should sever the bond sin has over us and sin no more.  After He died for us, it is the least we can do for Him.