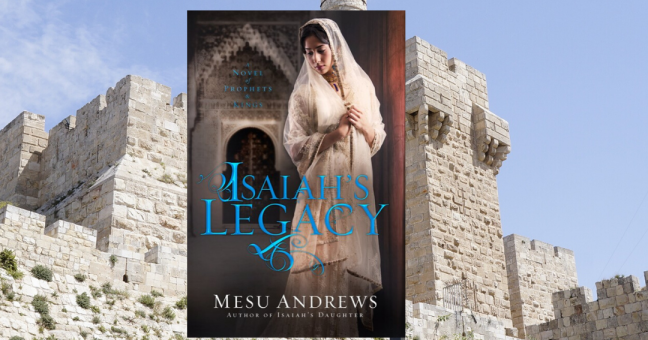 Isaiah’s Legacy by master wordsmith Mesu Andrews is Biblical Fiction at its finest.  This is book #3 in The Prophets and Kings Series.  It is an impressive 400 page paperback book with an enchanting cover.

Author Andrews has a captivating style of writing.  Her prose takes readers on a journey to ancient times and lands.  People from the Bible are brought to life on the pages of her book.  This is a well researched, well planned, and very well written novel.  I was immediately invested in the story.

Keeping true to scripture Author Andrews brings the life of King Manasseh front and center in her book.  He was a troubled, cruel man.  His father was King Hezekiah, who died when his son was only twelve years old. Manasseh has learning difficulties and needs to learn so much to rule. Shebna is his tutor and has a brother with a similar disability who’s daughter, Shulle, has assisted him.  Shebna offers rooms to his brother and niece in exchange for her help tutoring Manasseh.  Shebna uses her wiles to sway him away from Yahweh.  When Manasseh becomes king, he marries Shulle.

This is a powerful retelling of a Biblical story.    King Hezekiah restored Judah to a nation that followed God.   His son, King Manasseh, becomes Judah’s most wicked king and changes everything his father worked so faithfully to restore. King Hezekiah’s wife, Hephzibah, Isaiah’s daughter, struggles with her young son and losing her husband.  Then her heart breaks even more as she watches Manasseh take reign over their country and make horrible changes that result in the death of her father and friends. I found those parts hard to read, specifically about sorcery, child sacrifice and the killing of God’s people.

I highly recommend this spectacular novel.  It helps bring the Old Testament alive.  This would make a great group study book.  There is so much to discuss.  I loved it and have found it has stayed with me.  It definitely receives a 5 out of 5 stars rating from me.

A copy was provided by Waterbrook & Multnomah Launch Team. This is my own, honest opinion.

The drama of the Old Testament comes to life as Judah’s most notorious king ascends to the throne in this gripping novel from the award-winning author of Isaiah’s Daughter .

At eight years old, Shulle has known only life in a small village with her loving but peculiar father. When Uncle Shebna offers shelter in Jerusalem in exchange for Shulle’s help tutoring King Manasseh, Judah’s five-year-old co-regent who displays the same peculiarities as her father, she’s eager to experience the royal court. But Shulle soon realizes the limits of her father’s strict adherence to Yahweh’s Law when Uncle Shebna teaches her of the starry hosts and their power.

Convinced Judah must be freed from Yahweh’s chains, she begins the subtle swaying of young Manasseh, using her charm and skills on the boy no one else understands. When King Hezekiah dies, twelve-year-old Manasseh is thrust onto Judah’s throne, bitter at Yahweh and eager to marry the girl he adores. Assyria’s crown prince favors Manasseh and twists his brilliant mind toward cruelty, beginning Shulle’s long and harrowing journey to discover the Yahweh she’d never known, guided with loving wisdom by Manasseh’s mother: Isaiah’s daughter, the heartbroken Hephzibah. Amid Judah’s dark days, a desperate remnant emerges, claiming the Lord’s promise, “Though we’re helpless now, we’re never hopeless–because we serve El Shaddai.” Shulle is among them, a girl who becomes a queen through Isaiah’s legacy.

Mesu grew up with a variegated Christian heritage. With grandparents from the Pilgrim Holiness, Nazarene, and Wesleyan Churches, her dad was a Quaker and mom charismatic. As you might imagine, God was a central figure in most family discussions, but theology was a battlefield and Scripture the weapon. As a rebellious teenager, Mesu rejected God and His Word, but discovered Jesus as a life-transforming Savior through the changed life of an old friend.

The desire for God’s Word exploded with her new commitment, but devotional time was scarce due to the demands of a young wife and mother. So Mesu scoured the only two theology books available–children’s Bible stories and her Bible. The stories she read to her daughters at night pointed her to the Bible passages she studied all day. She became an avid student of God’s Word, searching historical and cultural settings as well as ancient texts and original languages.

Mesu and her husband Roy have raised those two daughters and now enjoy a tribe of grandkids, who get to hear those same Bible stories. Mesu’s love for God’s Word has never waned. She now writes biblical novels, rich with spiritual insight learned through fascinating discoveries in deep historical research.

Her first novel, Love Amid the Ashes (Revell)–the story of Job and the women who loved him–won the 2012 ECPA Book of the Year in the Debut Author Category. Her subsequent novels have released with high praise, shedding light on some of the shadowy women of Scripture. Love’s Sacred Song (Revell, 2012) tells the story of the beloved shepherdess in King Solomon’s Song of Solomon. Love in a Broken Vessel (Revell, 2013) tells the story of Hosea and Gomer and is the final stand-alone novel in the Treasures of His Love Series. Her fourth novel, In the Shadow of Jezebel (Revell, 2014) tells the fascinating story of Queen Athaliah and the courageous Princess Jehosheba.

The Treasures of the Nile series (Waterbrook/Multnomah, 2015-16) included The Pharaoh’s Daughter and Miriam and spanned Moses’ life from birth to the Exodus. Her 2017 release, Isaiah’s Daughter (Waterbrook/Multnomah), explores the life and ministry of the prophet Isaiah and the tumultuous days of Judah under the reigns of Ahaz and Hezekiah but focuses on the woman Hephzibah–a fascinating character in Jewish legends.

Mesu writes in their log cabin tucked away in the beautiful Appalachian Mountains. Her best friend is an American Staffordshire Terrier named Zeke, who keeps her company on long writing days. Zeke also enjoys watching movies, long walks in the woods, and sitting by the fireplace on rainy days.

To learn more about the author and other books she has written go to: http://mesuandrews.com/

One thought on “Isaiah’s Legacy by Mesu Andrews”