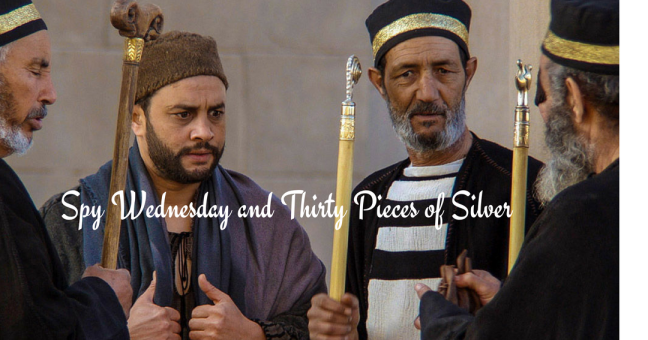 We all know about Easter week starting with Palm Sunday and ending with Easter. Do you know what happened the other days? Traditionally today is called “Spy Wednesday” because on this Wednesday before the crucifixion Judas conspired to give Jesus to the soldiers.  Judas became a spy, an agent for those wanting to hurt and kill Jesus. He made a deal to betray Jesus. Judas was paid,

given silver, to hand over Jesus. Hard to believe but true. Have you ever thought of Judas as a spy?  We don’t know exactly why Judas did what he did, but some guess he was trying to force Jesus to use His power and take control.

Scripture doesn’t say what Jesus did on that Wednesday. Scholars speculate He and His disciples probably spent the day in Bethany resting up from the activities of the past few days. Most likely the all were exhausted and Passover was soon. He might have spent it with His friends Mary, Martha, and Lazarus. Earlier Jesus had raised Lazarus from the dead and the people of Bethany believed He was the Son of God. Mary of Bethany went to Jesus and anointed Him with costly perfumed oil. Judas, the treasurer of the group, objected to the extravagance saying that the money could have helped so many poor people, hungry people. Jesus rebukes Judas and says Mary has anointed Him for His burial. Wow. That would make the room quiet and minds start to spin.

The disciples are saddened to think about Jesus dying and leaving them. They believe He is God’s Son, and they love Him. They don’t want anything bad to happen to Him. Scholars believe Judas was trying to force Jesus into claiming His kingdom now. They guess Judas didn’t believe anything bad would actually happen to God’s Son.

It is sad to see a follower betray his leader, especially when that leader is Christ. Ironically Judas threw down the money.  He didn’t want it.  Judas wanted Jesus to have His kingdom and power now.  Giving up control is hard but God’s way and time are best.  That lesson cost Judas everything.

Have you sold Him out for something? Do you try to change His time and replace it with yours? I am so guilty of that. Has something taken His place as first priority? Maybe you treat Him like royalty and the Son of God that He is. Sometimes it is easy to let things get in the way of worshipping Him. It is easy to put our own wants before what we really need to do.

Me? When I was younger it was easier to skip church. The desire to be outside with family seemed to outweigh being inside a stuffy church. Ahh, then my soul grew up. Now I need to worship our Savior. The One that suffered, was beaten, crucified, died, and rose from the dead so that I might claim eternal life with Him is the One I long to worship. My soul needs to sing His praises more than my body needs an extra hour of sleep or to be outside in the sunshine. I need Him to know He is my priority since I was His. His love is priceless.

“Then one of the Twelve—the one called Judas Iscariot—went to the chief priests and asked, “What are you willing to give me if I deliver Him over to you?” So they counted out for Him thirty pieces of silver. From then on Judas watched for an opportunity to hand Him over.” Matt. 26:14-16